I’ve joined a group of 40 men and woman who are all interested in learning the history of Delhi .  The group is called Seven Cities, a reference to the number of times Delhi has been veni-vidi-vici’d over the last 1000 years.  Everyone chooses a city, researches its history and gives a tour of the site.

Does it surprise you when I say that I am the student who sits in the front of the class, the parishiner who marches to the first pew, and the volunteer who offers to present the first city, knowing that I have only two weeks to prepare?

And so, I’m in the midst of working on my tour of Delhi’s first ancient city with three very smart and energetic women:  Nicole from England, Linda from the U.S. and Joyce from the Netherlands.   I won’t bore you with the details of history, although I find them fascinating, but I will give you the CNN synopsis:

Delhi’s first city dates back to the 11th century.  It was built by a warrior clan who was overthrown by another warrior clan who were overthrown by Afghan invaders.  The Afghan occupier of Delhi didn’t have an heir and his favorite Turkish slave inherited  the city – beginning 100 years of what is now called the Slave Dynasty.   This is also the beginning of many centuries of muslim occupation of north India. Delhi’s first mosque was built during the slave dynasty, as was a very picturesque victory tower, or minaret.

Here’s a look at the remains of the great arches along the western wall of that mosque I mentioned:

And here are pillars along the cloisters in the mosque.  They are reused remnants from destroyed Hindu and Jain temples.   The elaborate ornamentation on the pillars were covered with plaster when they were used to build the mosque and some figures are mutilated or plastered backwards into the columns and their backs inscribed with verse from the Quran.  This is because natural life forms are forbidden to adorn Islamic architecture.  In contrast, Hindu architecture is elaborately adorned with tendrils of leaves and flowers, animal gods, and human forms. 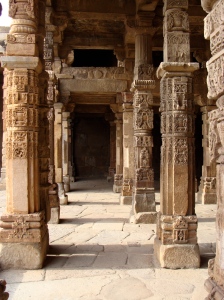 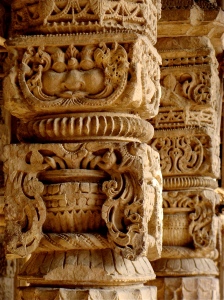 Moving on to living history and a story that refuses to end:  Jim was shat on by the shit-on-the-shoe guy for a THIRD time!  This has got to be a local record.  (For my new readers, see http://www-standupcomedy.blogspot.com/2009/09/toilet-talk.html for the original story and http://www-standupcomedy.blogspot.com/2009/09/quick-epilogues.html for the follow up.)  He says he nearly killed the guy this time, probably out of complete embarrassment that he keeps falling victim.

If you’re too lazy to read the back stories, here’s a quick review:   There’s a guy downtown who puts shit on unsuspecting people’s shoes and then offers to clean it for a fee.  HOW he manages to get the shit on the top of the shoe remains a mystery – but he’s quite skilled.  I think big, western-sized leather loafers make the perfect landing spot.  I’m now so curious about the guy that I want to get shat on, too!  I’ve considered decoying myself but Jim says the man will never target a woman.  I have to try… for shits and giggles!

(And speaking of… I have just just just this minute accepted a request to address the men at a Burns Night party Saturday eve.  What the hell am I going to say….???  You can be certain that I’ll have a bit of scotch in me  – funny speeches are not my forte.  Jim is going to shake his head in that way that only he can when he looks at me and asks, What the hell have you gotten yourself into?  OR…. How are you going to embarrass me this time?)

My busyness this week has included entertaining the kids on YET ANTOHER DAY OFF FROM SCHOOL, this time for India’s 60th Republic Day.  We had a picnic, played frisbee and went roller skating:

When we returned home from the picnic we heard the call of a snake charmer walking down our street and we invited him to entertain us:

I also had an interesting dinner this week with a group of trailing spouses – all of us looking to reinvent ourselves and/or to make money.   I discovered that my interests are too many, that my skills are too few, and that there’s probably little chance that I’ll ever achieve the one and only meager financial goal I set for myself many years ago and have yet to achieve:  to earn the equivalent  in annual salary as my age times 1000!