We celebrated a riotous Hindu holiday today called “Holi”.  It’s a street-side festival of color and laughter and the closest celebration to Mardi Gras that I’ve encountered since we left New Orleans.  There’s public revelry, exhibitionism, and consumption all in the spirit of new beginnings.  Here’s a taste of the mood before I give you the background:

That’s Jim, or “Hubba” as I often call him – and our landlord, along with the boys and half-naked revelers in the background.  This being conservative India, the comparison to Mardi Gras ends there, as only men can get away with being topless here.  It’s about noon in this photo and the fun has been underway for a few hours. We first went to our neighbor’s for the initial dousing in color and a bit of breakfast. The colors are powder – don’t ask me what the powder is or where it comes from… I don’t want to know.  Some dyes are “organic” and easily wash off the body – and others are not and do not.   However, if you play Holi, you have to be prepared to accept anyone’s powders – organic, synthetic, nuclear!

Here’s how it works:  you walk the streets of your neighborhood with bags of colored powder and you smear the powder on anyone you encounter who appears willing to play.  You can also make colored water balloons, or buckets of colored water, or use water guns.  It turns into a fun battle for the kids, or anyone willing to raise the stakes to friendly warfare… all in the name of laughter and fun. 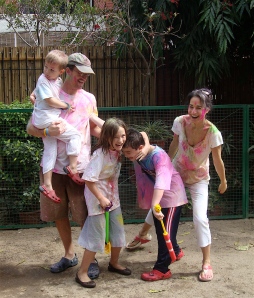 There are several explanations for celebrating Holi:  One is that being awash in the colors of spring makes us all look alike – reminding us that we are ONE and similar. We should let go of anger and grudges and  whatever it is that mires us in unhappiness and begin the season fresh, in love and peace.

Two, Holi is the celebration of divine intervention and the destruction of a bad mythological king.  And Three, Holi actually means “to burn” and represents the burning away of evil and the resounding strength of goodness.

For the most adventurous and traditional, Holi also involves the legal consumption of bhang, a marijuana-like leaf that, when ingested, makes  Holi a holi-day to remember!  I saved recipes from the Hindustan Times for bhang donuts and bhang pot pies.  I haven’t found much chocolate in Indian sweets, but I bet bhang brownies would go over well here….

Happy Holi, all.  Or as the locals say, Holi Mubarak! 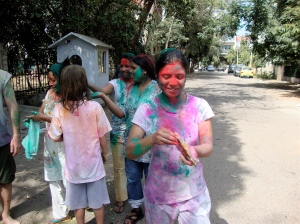 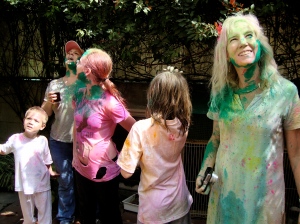 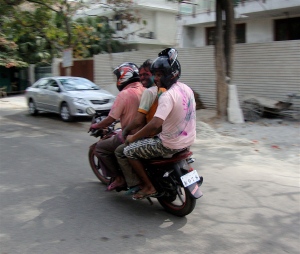 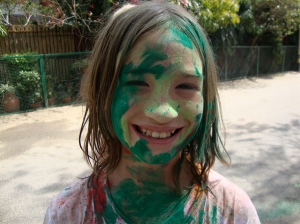