When 95 degrees feels cool, you know it’s been a hot spring.  Last week the thermometer hit 110 or higher in Delhi.   This is  a searing, exhausting heat.  On the last day of school I was wilting from the temps and the prospect of having to entertain my kids for 11 weeks.

I bought a yummy orange from the campus kiosk and I threw it into my purse to eat on the ride home.  The school oranges are wonderful – imported from Florida, seedless, sweet, juicy, easy to peel – unlike the fruit I get from my local stall.   To digress for one  luxurious paragraph, I’m reminded of the poem by William Carlos Williams “This Is Just To Say”:

I really wanted that orange.  I had a car full of kids and we were on our way home. I was in the front passenger seat, peeling and anticipating – when a hopeful, young face pressed against my window.  It was one of the beggar children from the intersection that I have written about so many times.  Ahh… Those hopeful eyes looking at my orange.

For the first time, I hesitated.  I’ve been mad at the kids on that corner, frustrated with them, sad for them, moved by them – but never have I not wanted to give to them.  Water, clothes, toys, shoes, boiled eggs, cake, doggie bags, and lately, earrings.. it’s all passed from my car to their hands.

Until last week when the heat got the best of my head and my heart and I just didn’t want to hand over that succulent, precious orange.   I took a moment while the car sat at the red light, knowing that I had time to debate with myself.  Would I feel bad if I didn’t hand-over my orange?  Would the universe play tit-for-tat with my fate if I were this one time, very-very selfish?  Was I wrong for even weighing a decision?  How many Our Fathers and Hail Marys would it take….?

You can easily guess what I did:  I split the orange and shared half.

But it wasn’t a selfless act.

Today, I took the kids to the Jain Bird Hospital.  It’s housed on the grounds of the a Jain temple in Old Delhi.  Jainism is an Indian religion that emphasizes peace and non-violence.  Jains believe in a creator, but after that, one’s fate is self-determined. Jains strive to live good, ascetic lives to break the bondage of reincarnation and dependence on a material life.  The most devoted Jains wear only a simple cloth – or nothing at all – and carry a broom to sweep away creatures to avoid harming them.

The hospital cares for  sick birds.  Most of the birds have injured wings from flying into fans or kite strings.  There are oodles of pigeons and doves, a few finchy-type birds, two peacocks and one falcon.  They keep the falcon in a big cage away from the tasty meals in the other cages.

When we go on an outing like this, it’s never easy.  Old Delhi is congested and dirty – the saddest of the sad sleep on the streets;  limbless, mutilated beggars ply the sidewalks;  pesky rickshaw drivers follow tourists;  the odd stranger offers tiresome tidbits of local info in hopes of getting a few rupees.

Lala held on to me with one hand and put her finger in her ear with the other – a habit she relies on to block the chaos;  Eddie held my other hand and George grabbed the back of my dress.  This is how we moved through the mess from the car to the grounds of the temple.  The gate was locked and wrapped in chains and seemingly impervious.  My heart sank.  Someone sidled-up and told me that the hospital was closed from noon to six.  (Not true…)

I persisted, as one does if you want to get anything done here.  The guard unlocked the gate and unraveled the chains and we got into the hospital which, was in fact, open.

We wrapped-up the adventure with lunch at a clean and familiar café, but we first had to dodge potholes and stray dogs and suffer a stinky alley to get to the restaurant.  Then we went home to play soccer.

It was all so normal and yet not…

I wonder what my kids will remember from this day?

Lala and Eddie at the bird hospital: 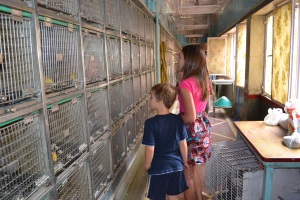 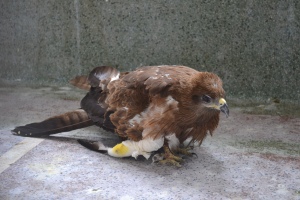 I won’t write again until August when we return to Delhi.  Have a wonderful summer, everyone!  Here’s a slice of our last season: