We’re in the middle of moving hell – surrounded by boxes in our old apartment and greeted by piles of homeless items in our new place.  The movers come tomorrow to pack-out the big stuff.  I can’t find my deodorant, the kids’ medical records (school says I need to update their shots), and most important, the corkscrew.

Lala reminds me daily that she doesn’t want to move, that she hates the new house.  “Mortal Dread” she used to say to me when she was cutest three-year old to walk this earth.  It was a line she repeated from her favorite book, Miss Spider’s Tea Party.  These days she seems to live in mortal dread of everything. It’s a hormone-induced pubescent call to arms against the adult world, I think.

George, on the other hand, is embracing this move with great enthusiasm.  He’s a loving yet mildly unsentimental child.

Eddie is sad (as we all are… ) about leaving Julie and Penny, our local street puppies.  They are defacto pets and committed as we have been to their well-being these last two years, we know that we can’t take them with us because the street dogs in the new neighborhood will devour them.

Every block in Delhi has its dog.

I have accepted a part-time teaching job.  (There are no part-time jobs, you say?)  I won’t go into details until I get a better idea of the challenges I face when I start next week.   There will be plenty to share of this new adventure… all in good time.

And finally, worth mentioning in the news:   Anna Hazare broke his 12-day fast yesterday with a sip of coconut water.  The Gandhian and social activist has rallied the nation these past few weeks with his anti-corruption campaign.  Hazare wants the government to create an independent committee to investigate government corruption.  He ended his fast when Parliament agreed to a “morally binding” commitment to pass an anti-corruption bill this session.

I don’t have a problem with a hunger strike as a form of protest.  (That’s part of the debate here.)  But it bothers me that it takes a single martyr to get the Indian government to listen to tens of thousands.   Lots of people scream for better governance but no one listens.   Even more – the poor and disenfranchised – quietly suffer the indignities of corruption.

Corruption is systemic and normalized in India.  Critics don’t trust that an investigative committee won’t become tainted as well.  I wish I had a better sense of whether this is an important moment.   Many seem to think it is because Hazare’s campaign galvanized a historically quiet minority:  the Indian middle class.

That’s my mother in front at the barre last week.  We went to her 50-year Royal Ballet School Reunion at White Lodge in Richmond Park.

The memorial to the victims of the 2005 London subway bombings.  I passed it on one of my runs in Hyde Park:

Mom hamming it up in the dressing room at the store where Kate Middleton is rumored to have worked.  We both bought the dress! 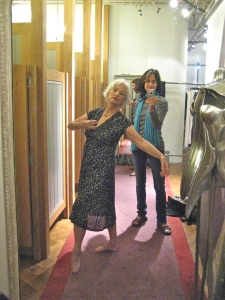 Me in front of Buckingham Palace.  Can’t remember what I said to make the guard laugh.  Jim has always said I’d flirt with a flea if I could… 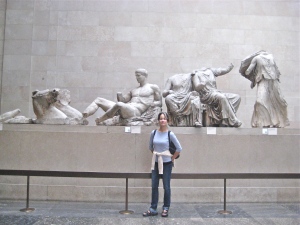 And to wrap it up, dinner with friends upon my return from London.  (Notice the dress, mom…)  Daddy was happy to have me back.  He did a great job juggling the kids, the impending move, and the crazy Gandhian who had him writing stories every day.  The village kicked-in too… thank you, Kristi!