I attended a burial at the Jewish cemetery in Delhi last Thursday.  It was late in the day after a record rain fall and the skies were dark and wet.   The moody weather didn’t heighten the sadness of the event – rather, it seemed soothing to have the storm’s after-rain fall gently on the friends who gathered together. Sometimes it’s nice for the sun to hide in seeming solidarity with the moments when we’re feeling not so sunny.

The story of the burial isn’t mine to share.  But the cemetery is common ground and after spending an hour within its walls, participating in the rituals of a burial, I wanted to return, take pictures, unearth its story.

This small, overgrown plot of land sits next to the sprawling Christian cemetery in the center of Lutyin’s Delhi, the part of the city built by the British when the colonial capital moved from Calcutta to “new” Delhi in 1912.

Sadly, the cemetery is strewn with broken bricks and trash from squatters who have lived on the property for over 40 years.  Ezekiel, the caretaker of the Judah Hyam Synagogue next door says he can’t uproot the families who live in the graveyard because they are protected by the city’s settlement laws.

It doesn’t seem incongruous to have families living among the dead in India.  The buried have more claim to land than many of the living who can’t afford to own or rent land or property.  When you see families surviving in the open-air on corners of chaotic urban concrete, it’s nice to know that someone has claimed a bit of quiet garden.

Ezekiel is an Indian Jew from Bombay who has worked for the International Human Rights Commission in Delhi.  He’s now semi-retired from law because he says his obligations at the synagogue occupy much of his time.  Some of his family, like so many Indian Jews, moved to Israel after WWII.

Jewish settlements  in India go back more than 2000 years beginning with the Cochin or Malabar Jews of Kerala in South India.  This Jewish community dates to the reign of King Solomon when sailors from ancient Israel came to south India for trade in the tenth century B.C.

Not long before the birth of Christ, a shipwreck near Mumbai stranded a group of Bene Israel from Judea.   These “sons of Israel” settled in Maharashtra and north-west India.

The Jewish cemetery in Delhi is 80 years old.  The city set aside this land for burials in 1932 for Jewish civil servants in the British colonial government.  There’s a grave of a former British Indian soldier who fought during WWII.  A victim of the Indo-Pakistan war is also buried here.

There are seven long-term Jewish families left in Delhi.  The synagogue services this community as well as a revolving diplomatic corp, mainly from Israel.  Ezekiel welcomes everyone into his congregation.  He says he has even performed weddings for Hindus.  He insists I bring my monsters to celebrate Rosh Hashanah next week….  I fear this may end his open-door policy!

The marble is cool in hot, humid weather… 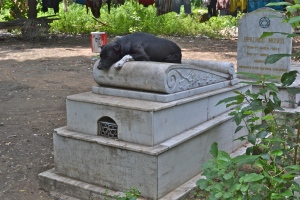 Ezekiel in the synagogue:

Eddie, my soccer star, wrapped in the Barcelona flag:

We dont’ have a generator at our new house, so when the electricity goes out, we light the candles and talk.  George, who has become obsessed with his books, reads by flashlight:

Some of my students:

And finally – one of the three beautiful women in this photo with me has just been promoted to Page One Editor/Deputy Managing Editor of the WSJ.   I am so proud of you, dear friend!

It’s been a weird 48 hours:  A bomb exploded not far from where we live, killing 12 and injuring scores more at the High Court;  Later the same day,  an earthquake shook us out of bed – it wasn’t powerful, only 4.4 on the Richter scale, but it was centered just outside the city and the proximity made it feel significant;  And today, the skies spilled an enormous amount of rain on the city.  Our front yard (and soccer pitch) looked like this:

Every year has a different flavor when you live as an expat.  You move, you settle, you explore, maybe you work.  You nestle, you travel.  You make new friends, you say goodbye to old ones.  Life is fluid.  And in the spirit of fluid I have flowed into a new adventure:  A Job.

I am teaching a writing and reporting class and developing the curriculum at World Media Academy, an exciting project managed by the International Center for Journalists and funded partly by the Knight Foundation.  I have 15 adult students from India, Nepal, Bhutan, the US and two arriving soon from Italy and Syria.  The students are enrolled in a one-year multi-media program that gives them strong skills to manage a modern journalism career that now blends print and broadcast.  Some of the students have worked as journalists already and are looking to flesh-out their skills.

The students are dedicated and very smart and ever-so sweet.   I was moved by their personal essays:  Many struggled through tenuous economic and political environments growing up;  most emphasized duty to their families and communities.

I teach six 90-minute sessions a week which means we spend a lot of time together.  The director of the school focuses on broadcast writing and another faculty member handles much of the technical stuff.  My days will get even more exciting when the students hit the streets and start writing and shooting and producing good stories.

Monkey Business:  Rhesus macaque monkeys love the American Embassy School grounds.  The pesky pests often breach the high walls and barbed wire.  It takes this dominant langur monkey to keep them away.  He spreads (sprays?) his scent on the boundaries of the school to discourage the other monkeys from playing inside: 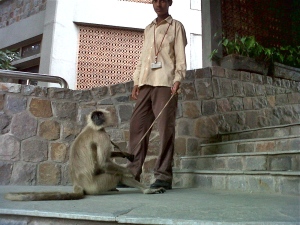 I don’t have photos yet of my class or the inside of the school, but I did shoot this the other day as I was leaving.  The school is located in the building with the satellite on top.  You have to adjust your eyes in Delhi – everything looks this messy on the outside.  Inside, we are building a state-of-the-art facility: 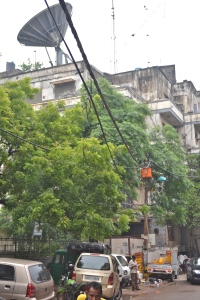 And finally – I’ve had requests for more house photos.  Here are two shots of our two-week-old living room: