I’ve had one maddening and one deeply moving clash with culture since my last post, and I can’t write about either to protect the people involved.  One incident has led to a three-day headache that I’m still nursing, and both have me reflecting about how to understand fundamental differences in how people see the world and navigate through its messiness.   Maybe as I reconcile these struggles, I will find a creative way to share my experiences with you.

Life often rewards, and I ended my week with this crew of beautiful faces – all lightness and hope and good salve for a heavy few days:

They performed a flash mob dance in a local market.  Friends of mine, Peter and Delaney (below), organized the dance in honor of National TB  Day to raise awareness about the spread of tuberculosis in children.  The dancers are from their neighborhood park.  Peter is a doctor and leading TB researcher and runs the TB program for the Gates Foundation.  His wife, Delaney, a doctor as well, produces and films documentaries on mental health.

Every day after school the boys play soccer on the high school field.  It’s a massive pick-up game, with kids from 1st through 5th grade, and sometimes even middle school, showing up to kick the ball.

I sit and supervise, and chat with my mommy friends or read the newspapers, my book, my ipad.

The other day, I looked to the side of the field where there’s construction underway, and I saw four Indian women carrying bags dirt on their heads, clearing the site of debris.  This is a common sight in India, but it seemed incongruous on the grounds of a western, collegiate institution.  I didn’t take a photo at the school, but here’s one of women working near my house:

I pass women like this often, working at public and private construction sites.  Men dig; women haul dirt, or bricks or concrete.  Both jobs are backbreaking.

Outside of domestic work, there is little option for uneducated, or even mildly educated women to enter the workforce in India.   Many factors keep poor women from working:  traditional lifestyles, lack of education, no bathrooms for women. (Educated women span the workforce and help run the country… discussion for another post.)

Women who carry dirt often work in tandem with their husbands.  They move from job to job, together.  They are poor, often migrant.  Families live on work sites; children play nearby in piles of sand or other construction material.

I wrote to the director of the school because seeing these women on campus bothered me:

“I know that this is a complicated cultural and economic issue, but I think it’s worthy of discussion in terms of how AES interacts with the community.

Perhaps, as a community that cares so much for our host country, we can begin to discuss, if we already haven’t, what we can do to make sure that we support a healthy work place for contract workers in particular.

Can we offer basic skills training to these women so that they carry away from this  job more than our dirt?  Can we train and hire more women to work at AES – in the cafeteria, on the grounds, etc…

When we were traveling in Jaipur two years ago, my son, George, asked me:  Where are all the women?  We were on a rickshaw in the old, commercial section of the city.  He was right, there was almost none.

Sadly, when women are present on the streets, so many of them are either begging or carrying dirt.

If you think that there is something that AES can explore further here, I would love to lead/organize a discussion.”

Dr. Hetzel’s response was kind and reflective.  He assured me that the school’s standards for construction workers surpasses that of most places in the city.  He said he thought that we could do our small part to help – maybe we could train and hire more women in the cafeteria and other departments.  He welcomed my ideas  – and thought that we could turn this topic into a service project.

So now it’s time to brainstorm.  Any ideas out there?  (Delaney?)

And a quick mention of an incident that I did not write about when it happened because so much was still unknown at the time… It is one that still lingers with my family, and I am sure, many others in the community:  One of the mothers in our school was targeted in a bombing.  She was on her way to pick up her seventh grader, Lala’s classmate, and her kindergartener, when a man on a motorcycle attached a magnetic bomb to her car.  She was seriously injured and eventually medi-vac’d out of the country.

Iran is implicated in the bombing.  The victim is an Israeli embassy employee and the wife of an Israeli diplomat.

The mommy factor deeply affected my children and their sense of safety.  I have written many times about managing their fears and helping them to cope, so I won’t revisit this issue now.

The bombing happened when Jim was in Pakistan working on a story.  The next day, he received a twitter message from an Indian name that he did not recognize and it scared him:  something to the effect of, “@jimyardley, doesn’t your wife work at the same school where the bombing victim was heading to get her children?”

Jim says the note alarmed him and he found the sender in the US, called his workplace and left a message for him to call back.

Jim returned to Delhi for Valentines Day and during dinner at one of our favorite restaurants (Tastes of India), the man returned Jim’s call.  I did not know anything of this story at the time.

The twitter message was an innocent note of concern from someone who found and follows my blog.   However, it did get us thinking about how much information I should share on this blog.  Of course, I could go private, but I’m not convinced that I have that many accidental readers.  You have to know me to find me.

This is what I see every day:

Luxury can be extreme in India.  Here’s me at the movies: 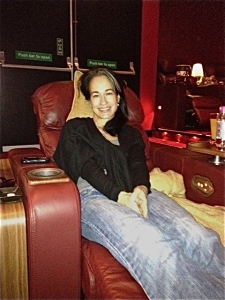 Our painless dentist.  Gotta love all those helper fairies in the room! 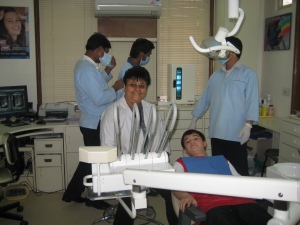 I went recruiting here for new students.  I think they need a new PR campaign. Read the title on the left of the white sign:

This was an interesting display I found in a local school.  You will need to zoom in:

Two of my handsome men at the school campout: 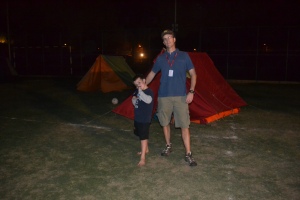 Breakfast with my mother-in-law and her husband, Don: 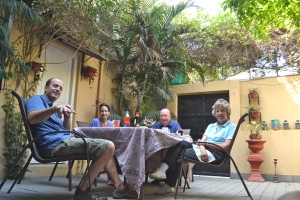 During my 15-hour flight home from the US, I went to the back of the plane to stretch my legs and walked into a fascinating conversation with two Indian men who live in the US, one in Princeton and the other in Fort Myers, Florida. We first chatted about everything-and-nothing and then the conversation turned to our destination:  India.  Both men were born there.  One left for college in the States and stayed to work, like so many NRI’s, or non-resident-Indians who left in the 70’s and 80’s to escape the economic malaise in the country.  The other left because he says he couldn’t practice his Christian faith.  Both men still clearly loved their country, but they couldn’t tolerate it.  Here are snippets of our conversation:

The corruption is systemic.  It saddens me.

You can’t set up an honest business or oversee an honest project unless an outside and independent assessor manages it.

The press is corrupted.  It’s a tool of the government and big business.

India was once clean – now it is dirty with corruption.  Businesses can’t  survive without joining the corruption.

The court system is powerless.  The laws aren’t enforced.

I love my country but it’s not what it was forty years ago.

Government schools are awful.  The teachers discriminate against the poor or underclass.

There is no housing for the poor.

Did you know that there are laws in some Indian states that make it illegal to convert Hindu Indians to another religion?

(This is a true.  The laws are enacted to stop Dalits, formerly called untouchables, the lowest class on the Hindu caste hierarchy,  from converting to Christianity.   Many of India’s muslims are long-ago converted Hindus.  Dalits are not actually recognized by the Hindu religion and many places restrict Dalits from participating in Hindu ceremonies or from entering Hindu temples.  Some Dalits argue that they are not actually Hindus because the religion refuses to recognize them.  The situation gets more complicated when Dalits convert, because they are entitled to government reservations.  Similar to Affirmative Action for minorities in the US, India’s reservation system guarantees job and education placements for the underclass.   If a Dalit converts to Christianity, they are no longer eligible for this entitlement, even though the society they live in still discriminates against them for being born Dalit.)

The poor will always be poor.

Jim is back from promoting the book and all is slowly getting back to normal in the Yardley household.  The grandmothers did a great job watching our children.  George has even commented that he has more fun with them than he does with me.  Barbara, you will be pleased to know that George and I make a great team against Lala playing “Words with Friends.”  Thank you for introducing him to the game.  He’s obsessed with winning and he learns to spell along the way.

Lala sang a duet and solo the other night – Pink’s “Perfect”.  It’s too long to send via email and she won’t let me post the video here, but I’m working on her.  I think she will give-in once the fuss is over.  She’s still learning how to receive praise.   I was so proud of her!   After the concert, my phone was buzzing with messages from friends who heard her sing and were bowled-over by the power and perfection of her voice.

And finally, the book.  It’s really over.  I think Jim is hung over from the emotion of it all.   Thank you to our friends and family who supported us along the way and through the tour.  It was a joy to share the celebration with you.

Two photos taken in Old Delhi by my mother: 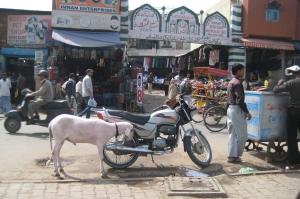 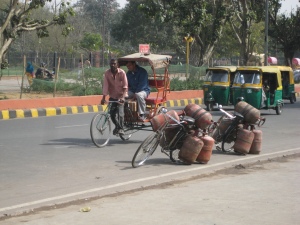 These are gas canisters.  Most neighborhoods don’t have gas lines.  Our first two years in Delhi, our stove was hooked up to one of these, just like a gas grill.  The gas always knew to run out while I was baking a cake.

Book tour continues for Jim. He is in North Carolina until the end of the week – returning to both Chapel Hill and Greensboro, a hometown boy and Brave Dragon. It’s been a fun and exhausting tour across the country. Jim spends his days doing “media” – mostly radio interviews. We had a lovely Yardley family reunion in SF, and BBQ with old and dear friends in Houston. We are still fond of that city. It was home base to Jim’s Texas travels and the womb that nurtured my nascent days of motherhood. Olivia and I bonded for three-and-a-half years in Houston before Mud-Pig invaded. (That’s her nick name for George.)

In New York, we slipped back even further into our past and celebrated with friends who shared our days in Atlanta more than twenty years ago. They were coupled around a dinner table with friends from China. The two groups were like book ends to one significant part of my life with Jim.

I have a few days sprinkled with a little work, but mostly there’s time to relax and recover. Jim has given me a long leash to go “window shopping” in the City.

Home Friday. I miss my babies and surprisingly, India.

Photos: In SF with Yardley Aunties and Uncles.