Movie theaters offer all-Bollywood all-the-time in Delhi, with only a few poor selections from Hollywood and rarely a movie from anywhere else.

So it was a treat to visit the theater twice this month and enjoy decent cinema.

Skyfall was a fun homage to the old Bond flicks that I grew up watching (and “bonding”) with my father.  But the best part of going to the movie came in the few hours before the show, when I had to tell Eddie that he couldn’t come with me.

“What is a Bond movie anyway?” he asked.

The only thing he missed was the iconic car!

George may have pegged the Bond formula, but he’s still perplexed by the parallel tales in Life of Pi.  He wants to believe in the animal story even though logic tells him the “truth” that he seeks, is otherwise.  He’s too young to understand faith as a mechanism for managing reality.  Or faith as poetry.  (In honor of the season,  “Yes, Virginia, there is a Santa Claus.  He exists as certainly as love and generosity and devotion exist, and you know that they abound and give to your life its highest beauty and joy.”)

Lala says she wants to go to the India in the movie – the lush and creamy fairy tale version of the sub-continent:  India as Norman Rockwell might have painted it.

I wonder whether viewers outside of India understand why Pi’s family decided to move to Canada.  The movie takes place in the 1970’s in the years leading up to and during the “Emergency” when Prime Minister Indira Gandhi suspended civil liberties.   Nationwide strikes had paralyzed the economy and Gandhi lost the confidence of the nation after she was accused of election fraud.  During Emergency, she suspended elections, censored the press and modified the Constitution.  Police arrested political opponents and detained them without trial.  They also enforced an over-zealous sterilization campaign.

With the economy shattered and the future uncertain, Pi’s family leaves India.  But you never got a sense of the necessity of their move in the dreaminess of Pi’s memory.

Do you remember the scene at the dinner table when Pi’s father admonishes him for following too many religious traditions?  While delivering his lecture, he kneads his meal with his fingers, pasting his rice and sauce into a glutinous ball and eating it.

I confess:  This custom drives me to the edges of nuttiness!  Something in me screams, Grab your naan and scoop-up the sauce!  But not every meal is served with Indian flatbread.  (And rarely, utensils.)

Others cultural nods in the movie:  subtle head tilts to say “OK”;  the red bracelet Pi’s girlfriend ties on his right hand to protect him – perhaps a foreshadow that he will need it.

George is still grappling with the “truth” – he brought it up again last night.  One day he’ll understand that Richard Parker, the tiger, was far more human a character and therefore more believable,  than the people on the boat who devolved and used their animal instincts to survive.

Sweet boy, sometimes the simpler questions are harder to answer.

It’s been a crazy month of work and kids and the juggle that keeps all suspended in perpetual motion.  I have wanted to write a post for weeks… and only now have a chance to tap-tap-tap one.

From the India Yardleys to our friends and our ever-growing family (I’m going to be an auntie!) – we wish you a holiday filled with a generous spirit that delivers love and joy and all good things. 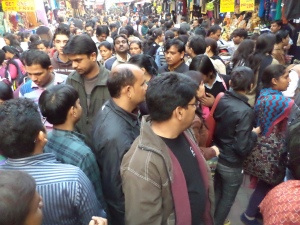 Georgie decorating his gingerbread house and dancing to Michael Jackson: 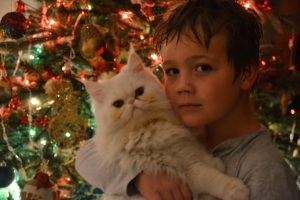 Hunting for owl pellets in Lodi Garden, near our house:  (Really, really cool way to keep the kids entertained…)